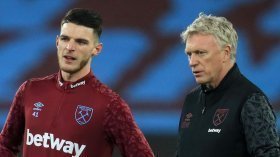 “Cristiano Ronaldo has never featured in a team as poor as Manchester United”- Jamie Carragher wants Erik ten Hag to get rid of Ronaldo this summer
Also Read: West Ham United might insert a release clause in Declan Rice’s new contract amidst interests from Manchester United and Chelsea:
26/05 18:46

Chelsea are planning to negotiate a new contract with midfielder N'Golo Kante amid the interest from Manchester United.

Manchester City are set to compete with Manchester United in the race to sign West Ham United midfielder Declan Rice this summer.

Manchester United are keen on landing the signature of Leeds United midfielder Kalvin Phillips this summer.

If Pogba leaves Manchester united this summer who could united get

With the Frenchman's contract expiring this summer, it appears that the 29-year-old will not be signing a contract extension. Pogba, who came through United's academy ranks was sold to Juventus, where he emerged through the limelight united, is contemplating over a return to Juventus. Extending his time at Man United remains open, but the 29-year-old has interest from PSG and is mulling about a return to Juventus. United paid Juventus €86 million to reclaim their player in 2016, and it appears that if he leaves United for free at the end of the season, they will not receive a dime. The Red Devils are likely to make a move for a center midfielder this summer, with that position being one of the most important on the field. Manchester United are anticipated to sign a center midfielder this summer, with the position being one of the team's weak spots during their disappointing season.

West Ham United are set to demand a staggering £150 million for Declan Rice amid interest from Chelsea and Manchester United.

Chelsea need to break the bank to sign England star

Chelsea will need to pay a staggering fee of around £120m to land West Ham United midfielder Declan Rice.

Chelsea midfielder Jorginho could entertain a surprise return to Serie A during the next transfer window, Il Romanista claims.