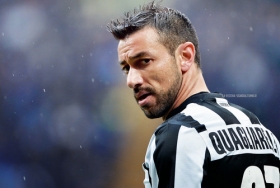 Juventus keeping tabs on 37-year-old goal machine Fabio Quagliarella
, in their 2-1 defeat to Eintracht Frankfurt Manchester City should not make a £90m bid for Tottenham's Harry Kane and should instead focus
05/01 10:46

Torino have signed Fabio Quagliarella from Serie A champions Juventus, thereby welcoming the striker back to his first club as they look to rebuild their attack this season.

Southampton to move for Fabio Quagliarella

Southampton are set to make a shock transfer move for Italian striker Fabio Quagliarella as soon as the transfer window reopens in the summer. The Juventus striker has been linked with a move to England for over two years.

Manchester United winger Nani and Bayern Munich Striker Mario Mandzukic are both being targeted by Juventus to bolster their attack.

Southampton are readying a January transfer offer to sign Juventus striker Fabio Quagliarella, according to Tuttosport.

Arsenal are closing in on the signing of Spanish striker Fernando Llorente from Serie A giants Juventus on a temporary basis during the winter transfer window.

Juventus striker Fabio Quagliarella is ready to fight for a first team spot at the Serie A club, according to his agent Beppe Bozzo.

The 30-year-old Italian International was expected to leave the Turin outfit during the recently concluded summer transfer window following the recruitment of Fernando Llorente and Carlos Tevez in the attacking department.

Although the likes of Norwich City, West Ham United and Valencia were all interested in acquiring the player's services, his agent Bozzo insisted that his client was in no mood of leaving Juve this season.

Bozzo told TMW:  "Fabio didn't want to leave Juventus. He simply asked for more space in the side because he knows he can be of use. And boss Antonio Conte has always believed in him.

"Quagliarella received a number of offers from Italy and abroad, but the club decided to keep him because he is part of the project and considered an important player.

"Then it is only normal that you have to accept the rotation policy when you are part of a great side."

West Ham manager Sam Allardyce's efforts to bolster his squad before the end of the transfer window look set to come to fruition as reports from Italy indicate the Hammers are on the cusp of agreeing a loan deal for AS Roma forward Marco Borriello.

West Ham are all set to wrap up a deal to sign Italian international forward Fabio Quagliarella. The Hammers have beaten Norwich City to Quagliarella's signing and the player will fly to London for a medical this afternoon.

Norwich City's manager Chris Hughton has remained tight lipped on reports of a move for Italian striker Fabio Quagliarella. The Juventus striker is currently out of favour in Turin.

Premier League outfit Norwich city are inching closer to the signing of Fabio Quagliarella from Serie A champions Juventus.

Italian international striker Fabio Quagliarella will quit Juventus at the end of the season, according to reports. The forward has grown increasingly frustrated at his perceived lack of first team opportunity.

Manchester United target Fabio Quagliarella can leave Juventus this January, according to reports. The 28 year old has fallen out of favour at the Serie A league leaders.

Fabio Quagliarella could be joining Tottenham, according to reports emanating from Italy. The Udinese forward has been one of the best players in Serie A in the last couple of years, and Tottenham are reportedly on the look out for a long term replacement for Dimitar Berbatov.

Udinese striker Fabio Quagliarella has angrily rejected rumours that he could make a move away from Udine to Napoli. Fiorentina and Man Utd have also been linked with the up and coming striker. Quagliarella has had an outstanding season and seen his value rise considerably.

An impressive Italy performance saw the Azzurri pick up a brilliant 3-1 victory over Portugal. Goals from Luca Toni, Andrea Pirlo and Fabio Quagliarella were enough to finish off the Portuguese in a friendly in Zurich.