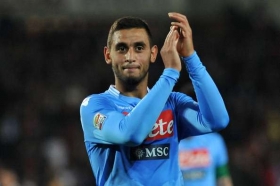 Napoli, Juventus & Inter eye move for Chelsea full-back Emerson
remains at Chelsea. Napoli are considering replacing Mario Rui or Faouzi Ghoulam with the Italy international in the next...
03/04 16:58

Wolves have reportedly begun talks over the possibility of signing two Napoli players in the upcoming transfer window.

Manchester United have reportedly lodged a bid worth £40m to secure the signature of Faouzi Ghoulam from Napoli at the turn of the year.

Manchester United are prepared to pay a fee in excess of &pound26m in order to prise away Faouzi Ghoulam from Napoli at the end of the current season.

Serie A trio Juventus, Napoli and AS Roma are prepared to battle it out for the services of Manchester United defender Matteo Darmian in January.

Premier League holders Chelsea are weighing up a move for Napoli defender Faouzi Ghoulam, who is out-of-contract at the end of the season.

Liverpool are viewing Hull City left back Andy Robertson as the ideal player to add to their defence when current defender Alberto Moreno is eventually sold by the club. Liverpool recently turned down an £11 million bid from Napoli for Moreno, as they look to raise £15 million for him.

Napoli defender Faouzi Ghoulam may be the man to end Liverpool's left-back problems, with the club having only one recognised player in that position, which lead to James Milner being used as cover for much of the last campaign.

Arsenal have sent scouts to Italy to watch Napoli duo Lorenzo Insigne and Faouzi Ghoulam, with a view to signing the pair in the summer, in an attempt to strengthen their squad and once again challenge in the Premier League.

Premier League leaders Chelsea are reportedly keen on signing Napoli's Faouzi Ghoulam on a free transfer in the summer.

Algerian international Faouzi Ghoulam has turned down a fresh deal with Napoli after they failed to match his contractual demands.

Spanish giants Atletico Madrid have joined Chelsea in the pursuit of Napoli full-back Faouzi Ghoulam. The Algeria international has been a regular for the Naples outfit in recent seasons.

Arsenal have been told to forget thoughts of signing Napoli defender Faouzi Ghoulam in the near future, according to reports.

Arsenal are days away from announcing their second signing of the summer transfer window, according to reports.

Arsenal are beating the likes of Manchester United and Chelsea in the race to sign Napoli defender Faouzi Ghoulam.

Premier League side Liverpool are set to join the race to sign Saint Etienne defender Faouzi Ghoulam, according to the Daily Star.