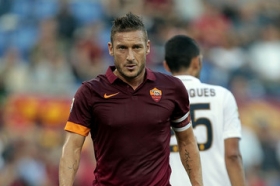 Francesco Totti on why Liverpool transfer helped Mohamed Salah complete the 'impossible'
the penalty spot in Liverpool's 2-0 win at West Ham on Wednesday night which put the Reds 19 points clear at the top of...
30/01 10:32

Radja Nainggolan's future is still in doubt as he has still not renewed with Roma, and a recent instagram comment has added to speculation that he could leave the Giallorossi.

The Italian forward, who recently played his last game for Roma, is set to begin negotiations for a potential move to American club Miami FC.

Torino are keen to make Joe Hart’s loan from Manchester City permanent at the end of the current season, according to reports in Italy.

Leicester City are considering a move for Roma legend Francesco Totti, according to The Sun.

Leicester City in for Totti?

Roma's legendary captain Francesco Totti has admitted that he would welcome the arrival of Edin Dzeko from Manchester City this summer.

Roma forward Francesco Totti will sign a one year extension to his current contract. The 36-year-old has been with Roma for 23 years and played over 500 times for the club.

Chelsea boss Jose Mourinho criticised Manchester United's stance over the transfer of England international Wayne Rooney after seeing his club fail to land the striker with a second bid earlier this week.

Roma have completed a move for Moroccan international defender Mehdi Benatia, in a deal that sees the player move to Rome from Serie A rivals Udinese for around 13.5 million Euros.

Francesco Totti, the club captain of AS Roma, could quit the Italian giants after 19 years service. The former Italian international has spent the majority of the season on the bench and has fallen out with some sections of the club's support.

Bojan Krkic looks set to quit Barcelona, with Roma his next destination in a deal worth around 11m GBP. The highly rated 20 year old striker has found first-team opportunities limited at the Nou Camp.

Roma captain Francesco Totti has revealed he is delighted that Brazilian striker Adriano has joined the club this summer, admitting that it shows Roma have the ambition to push Inter Milan for the Serie A title next year.

Manchester City are reportedly set to make a shock offer for Roma striker Francesco Totti. It is understood that the Citizens are preparing a £25 million bid for the Italian frontman who captains his club.

Roma captain Francesco Totti admitted he was disappointed that the club missed out on the coveted signature of Adrian Mutu; who was expected to arrive at Rome from Fiorentina.

Real Madrid forward Julio Baptista has admitted he would like to make a move to Roma. The player's agent confirmed that the Brazilian would be interested in a move to Italy.

No Aquilani To Juve

Italian international striker Alberto Aquilani wouldn't be swapping AS Roma for Juventus this summer, according to his agent Franco Zavaglia.