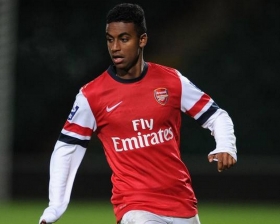 Arsenal fans 'gutted' as MLS club snap up Gunners ace Gedion Zelalem
side on five occasions. But yesterday his Arsenal career came to an end as he completed a free transfer to Sporting. And Gunners fans were
12/03 05:45

Chelsea's Ruben Loftus-Cheek and Arsenal's Gedion Zelalem have emerged as top targets for Borussia Monchengladbach for this summer's transfer window.

Bundesliga giants Borussia Dortmund are lining up a winter swoop for Arsenal youngster Gedion Zelalem. The teenager has failed to establish himself in the Gunners first-team despite being highly-rated in the youth system.

Arsenal midfielder Gedion Zelalem could join Bournemouth on loan in January. Zelalem is on loan at Scottish side Rangers until January 1st.

Scottish Championship side Rangers are close to announcing the signing of Arsenal starlet Gedion Zelalem on a season-long loan deal.

Arsenal are ready to offer a new contract to French star defender Laurent Koscielny in the summer, according to The Telegraph.

Arsenal manager Arsene Wenger has confirmed that 16-year-old Gedion Zelalem will pen a professional contract with the Gunners when he turns 17 this weekend.

Arsenal are reportedly set to land the services of one of the best young talents from the Bundesliga during the winter transfer window.

The Gunners were always originally known for their mighty contingent of Frenchman. But change is very much afoot at the Emirates. Germany is the new country of choice for Arsenal manager Arsene Wenger; with first team trio Lukas Podolski, Mesut Ozil and Per Mertesacker all in and out of the side and Serge Gnabry continuing to impress when called upon. However, there is a 16-year-old that could be set to set the Premier League alight in the future, his name is Gedion Zelalem.

Ethiopia national team manager Sewnet Bishaw has insisted that he would like Arsenal youngster Gedion Zelalem to commit his international future to the African nation.