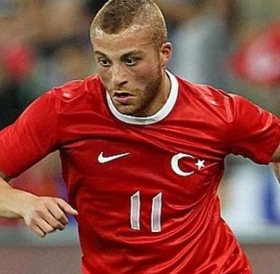 West Ham back in for Carlos Bacca?

West Ham United are set to retain their interest in AC Milan's Carlos Bacca just a year after the player snubbed a move to east London.

West Ham United have added Everton ace Gerard Deulofeu to their shortlist as they plan a major summer overhaul at the London Stadium.

West Ham United have reportedly keen on signing Sunderland's Jermain Defoe in the current transfer window. The Hammers are prepared to make a renewed bid for the veteran after their initial &pound5m offer was rebuffed.

West Ham United are reportedly prepared to terminate the contract of on-loan Juventus striker Simone Zaza. The Italy international has failed to live up to his expectations in the Premier League.

West Ham to be hit with enormous fee if Tore departs

Gokhan Tore has been told that he has no future at West Ham United, and the winger's early exit from the East London side could cost the Hammers as much as $4 million. Tore has been linked with a rapid return to parent club Besiktas.

West Ham United will have to deal with further injury issues after summer recruit Gokhan Tore was sidelined for five weeks with a quadriceps problem.

West Ham have made an initial offer for Ludwig Augustinsson, who is wanted as a replacement for the injured full back Aaron Cresswell. Defender Augustinsson plays for FC Copenhagen and will be allowed to leave for around £5 million.

Besiktas midfielder Gokhan Tore has joined West Ham United on a season-long loan with a view to a permanent deal in the summer of 2017.

Tore to West Ham on loan!

Gokhan Tore will join West Ham on loan next season and can reportedly make the move permanent for a fee in the region of £10 million.

West Ham United will complete the signing of Besiktas winger Gokhan Tore after they settled on a transfer sum for his services.

West Ham manager Slaven Bilic has confirmed that he has made an offer for Turkish international winger Gokhan Tore. The Besiktas man will be made available for a fee of around 17 million euros.

West Ham United are close to announcing the signing of Besiktas attacker Gokhan Tore. The Hammers have been in constant contact with the Turkish club over the player in recent months.

Arsenal are rumoured to be lining up a move for Besiktas midfielder Gokhan Tore, according to reports.

Atletico close in on Gokhan Tore

Atletico Madrid are inching closer to a summer deal for Turkey international Gokhan Tore, according to a Spanish source.

Atletico Madrid are reportedly tracking the progress of Besiktas midfielder Gokhan Tore, with a view to summer offer for his services.

Manchester United have sent a scout to watch Besiktas winger Gokhan Tore. Reports from Turkey suggest that the Red Devils could make a £5 million move for the Turkish starlet.