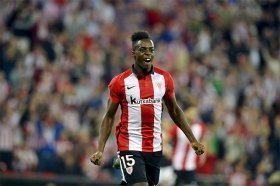 Inaki Williams: If Barcelona were to call me? Athletic Club is above everything
giants have been granted permission to sign a new striker outside the transfer window following a season-ending injury to Ousmane...
19/02 09:26

Spain international Inaki Williams has confirmed that he turned down advances from Manchester United prior to penning a long-term contract with Athletic Bilbao.

After Barcelona have recently cooled their interest in Arsenal right back Hector Bellerin, another giant of European football has emerged as a possible destination for the young defender.

Athletic Bilbao forward Inaki Williams insists that he could consider a fresh challenge elsewhere if a tempting offer arrived in the summer.

Liverpool boss Jurgen Klopp is prepared to cough up a club-record sum to land highly-rated Athletic Bilbao forward Inaki Williams. The 22-year-old earned his maiden cap for Spain earlier in the year.

Liverpool are reportedly considering the prospect of lodging a winter bid for Southampton striker Shane Long.