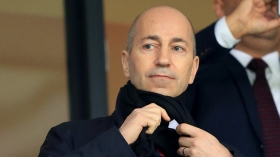 Olivier Giroud is to call time on his 9 year stay in the Premier League after spells with Arsenal and Chelsea. AC Milan have agreed a 2 million euro fee for the Frenchman.

Everton to part company with Moise Kean in January?

Everton are ready to let Italian international striker Moise Kean depart the club in the January transfer window. The Goodison Park outfit, who signed Kean from Juventus just this past summer, is ready to part with the forward for a fee of 30 million euros.

AC Milan have pushed through a deal for Algerian international midfielder Ismael Bennacer this afternoon, with the Serie A side announcing a 15 million euro transfer for the 21-year-old youngster, who arrives from Italian rivals Empoli. Bennacer caught the eye in the recent Africa Nations Cup, where his country went on to win the whole tournament.

AC Milan are to make an official approach for Arsenal midfielder Lucas Torreira. The Uruguayan international has hinted to reporters this summer that he would consider a return to Italy.

Arsenal defender Shkodran Mustafi has reportedly emerged as the prime target for AC Milan ahead of this summer's transfer window.

Arsenal's head of recruitment Sven Mislintat is on the verge of leaving the Gunners after seeing his influence at the club wane over the past six months. The German, who has helped to bring in the likes of Aubameyang to the Emirates, has reportedly decided to call time on his spell in the Premier League.

Arsenal are reportedly planning a fresh attempt to sign Cristian Pavon from Boca Juniors when the transfer window reopens in less than 15 days' time.

Former Arsenal manager Arsene Wenger has dismissed the possibility of him taking charge of Real Madrid, who are currently on the look out for a new head coach.

Arsenal's director of football Raul Raul Sanllehi has opened up on his plans for the club during the coming six months. Sanllehi is now in charge of Unai Emery's expenditure on new players in the wake of Ivan Gazidis' departure from the Gunners to AC Milan.

Former Arsenal chief executive Ivan Gazidis is keen on luring Aaron Ramsey to the Serie A once he takes his position with AC Milan later this year.