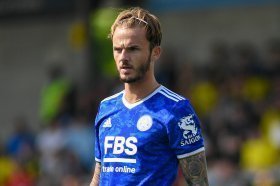 Leicester City midfielder James Maddison would prefer a move to Arsenal or Tottenham Hotspur this summer.

Newcastle have reportedly made a transfer window bid of £40 million to sign England international midfielder James Maddison. The Leicester City star, who had a sterling campaign last season and has been persistently linked with a move away from the Foxes, is apparently opent o offers of a transfer elsewhere.

Arsenal back in for Premier League playmaker?

Arsenal are reportedly interested in signing either Martin Odegaard or Houssem Aouar before the transfer deadline.

Arsenal have opened negotiations with Real Madrid over a permanent deal for Martin Odegaard, 90min reports.

Manchester United attacker Jesse Lingard has emerged as a potential transfer target for Leicester City, according to football.london.