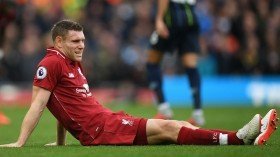 Liverpool hatch Sofyan Amrabat transfer plan as 'more talks agreed'
... on a move to the Premier League and Liverpool are expected to bolster their midfield options over the coming transfer windows. James Milner ...
07/12 17:09

Chelsea and Liverpool have suffered a fresh transfer blow with Konrad Laimer set to join Bayern Munich next summer.

Liverpool are prepared to release midfielder Alex Oxlade-Chamberlain when his contract expires next summer.

Liverpool will make a fresh approach for PSV midfielder Ibrahim Sangare in January, according to Calciomercato.

Arsenal have their sights on Portuguese midfielder

Arsenal have their sights on landing Wolverhampton Wanderers midfielder Ruben Neves this summer.

Veteran midfielder James Milner will be offered an extension to his current deal at Anfield, with Liverpool manager Jurgen Klopp admitting that the player is too important to let go. Milner has 6 months remaining on his current deal with the club.

Liverpool manager Jurgen Klopp has ruled out the potential loan departure of Neco Williams during the January transfer window.