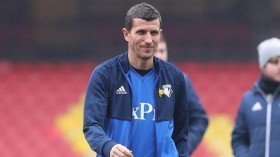 Watford have moved ahead of Arsenal in the race to sign Ismaila Sarr from Rennes during this summer's transfer window.

Watford has made an offer for Bordeaux attacker Francois Kamano. The highly-rated winger has so far scored 8 Ligue 1 goals this season and the Vicarage Road outfit have bid a reported 15 million euros for the player.

Manchester United coach Jose Mourinho has said that defender Luke Shaw will be fit to play for the Old Trafford side against Watford on Saturday.

Javi Gracia: We can be considered as the new Leicester City

Watford boss Javi Gracia has said that his side can be considered as the new Leicester City after a perfect start to their Premier League season.

Watford are interested in offering boss Javi Gracia a new deal after a perfect start to the Premier League season, the MailOnline reports.

Tottenham boss Mauricio Pochettino has blasted his side's first half performance in their 2-1 loss to Watford in the Premier League on Sunday.

Watford have completed the signing of West Ham youngster Domingos Quina, according to reports from London this evening. Watford had been pursuing Quina for over half of a year and have sealed a £2.5 million deal to bring the player to Vicarage Road and have beaten Burnley to the player's signature.

Watford have parted ways with manager Marco Silva following a run of poor results which has seen them win just one of their last 11 Premier League matches.

France international Yann M'Vila has insisted that he was distraught after missing out on a permanent move to Sunderland this summer.