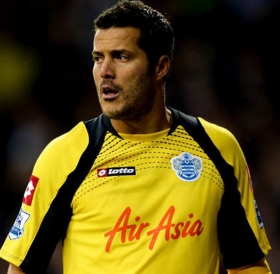 Benfica representatives have flown to London to discuss talks with Queens Park Rangers regarding a move for Brazilian goalkeeper Julio Cesar. The shot stopper has two years left on his contract.

QPR are considering making a move to sign Brazil legend Ronaldinho on a free transfer.

World Cup hosts Brazil qualified for the quarter-finals at the World Cup following their penalty shoot-out win over Chile.

Brazil won their first game of the World Cup with a 3-1 victory thanks to two goals from Neymar and a late decisive strike from Chelsea midfielder Oscar. Real Madrid defender Marcelo had scored an early own goal to put Croatia ahead.

Brazilian goalkeeper Julio Cesar has offered his public backing for the ball that will be used in the World Cup tournament this summer.

Southampton manager Mauricio Pochettino has made the loan signing of Julio Cesar his number 1 priority once the January transfer window reopens.

Southampton have joined the likes of Sunderland and Arsenal to sign the Brazilian.

Sunderland sitting at the bottom of the Premier League with just 8 points off 15 games are desperate and pondering a move for Brazilian International Julio Cesar.

Premier League giants Manchester City have once again been associated with a move for Real Madrid shot stopper Iker Casillas, according to The Mirror.

Manchester City are hopeful that a deal can be agreed with Queens Park Rangers for the signing of Brazil's number 1 goalkeeper Julio Cesar. The keeper has been told that he is free to leave Rangers in the January transfer window.

Queens Park Rangers manager Harry Redknapp has admitted that he is unsure as to whether Julio Cesar will try to fight his way into his starting XI for the Hoops this season.

Queens Park Rangers goalkeeper Julio Cesar has admitted that he is "proud" to be associated with a switch to a "big club" like Benfica.

The Brazilian International is set to leave the Championship outfit after just spending a year with the Hoops since his arrival from Inter Milan.

Arsene Wenger's summer frenzy is set to continue with rumours linking Arsenal with Toulouse's young keeper Ali Ahamada. The France U21 international has been watched by Arsenal scouts while scouting Ettiene Capoue, who eventually signed for London rivals Tottenham Hotspur.

Arsene Wenger is desperately looking to strengthen his side, as reports of interest in Spain captain and out of favour Real Madrid goalkeeper Iker Casillas have started to surface. Casillas was on the bench again for Los Merengues' season opener against Real Betis.

Arsenal target Julio Cesar content to play in the Championship

Queens Park Rangers goalkeeper Julio Cesar has admitted that he would be content in plying his trade in the Championship this season, if a move fails to materialise.

The Brazilian international who is yet to feature in the Hoops Championship campaign this season, has been heavily linked with a move away from the London club following their relegation from the Premier League.

Brazilian goalkeeper Julio Cesar is ready to quit Queens Park Rangers this summer, but the shot stopper has yet to decide where he will end up. Arsenal and Cardiff were both reportedly targeting the former Inter keeper.

Queens Park Rangers have agreed a fee with Italian side Fiorentina for Brazil international goalkeeper Julio Cesar. The shot stopper had been linked with a move to Arsenal earlier in the summer, but will now return to Italy.