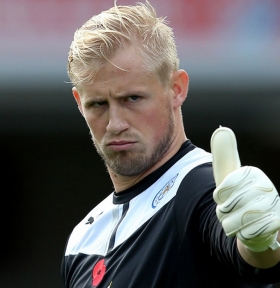 Brendan Rodgers responds to Kasper Schmeichel and Wesley Fofana's Leicester City transfer hopes
gnaws away at him. Fofana, meanwhile, this week listed Chelsea, Manchester United, and Manchester City among the clubs it would be a “dream”
18/11 17:38

Leicester City and Sheff Utd are both amongst the teams tracking the progress of impressive Trabzonspor shot stopper Ugurcan Cakir. The Turkish international, who is valued by his club at £25 million, is considered one of the best young keepers in the world.

Chelsea goalkeeping coach Christophe Lollichon has revealed that the Blues were considering a move for Paris Saint-Germain's Alphonse Areola during the recent transfer window.

Danish goalkeeper Kasper Schmeichel has put pen to paper on a brand new contract with Leicester City. The shot stopper, who helped the Foxes to their first and only Premier League title, has signed a deal worth a reported £140,000 per week.

Leicester City goalkeeper Kasper Schmeichel has said that his target in the Premier League this season is to have at least 40 points.

Sarri to hold talks with goalkeeper

Chelsea boss Maurizio Sarri is set to hold talks with goalkeeper Thibaut Courtois in order to convince him to stay at Chelsea, according to the Daily Star.

Real Madrid have made a £100m bid for Chelsea duo of Thibaut Courtois and Willian, according to the Daily Mail.

Claude Puel: We can keep Maguire

Chelsea goalkeeper Thibaut Courtois has reportedly agreed contractual terms with Real Madrid ahead of his proposed move to the Bernabeu this sumer.

Leicester City have reportedly confirmed the transfer of Liverpool goalkeeper Danny Ward on a four-year contract.

Liverpool have reportedly increased on their opening offer to sign goalkeeper Alisson Becker from AS Roma during the current transfer window.

Chelsea goalkeeper Thibaut Courtois is close to a move to Real Madrid with Chelsea agreeing a €35m move for the Belgian with the Champions League holders, according to the Daily Star.

Premier League back with a bang

Arsenal and Leicester City put on a real spectacle on Friday night as we welcomed back the Premier League. Both teams played some great attacking football, but it was Arsenal who took the three points after a 4-3 victory.

Leicester City are targeting Croatian goalkeeper Lovre Kalinic of Belgian club Gent, suggesting that they may have come to terms with the departure of Kasper Schmeichel, who continues to be monitored by Manchester United.

Leicester City are in advanced talks about a £2 million deal that will see them sign Hull City goalkeeper Eldin Jakupovic following The Tigers' relegation from the Premier League.

Leicester City manager Craig Shakespeare has put a £50 million price tag on goalkeeper Kasper Schmeichel in an attempt to deter interest from the likes of Liverpool and Manchester United.

It has been football's worst kept secret since it was almost completed two years ago, but it appears that Manchester United and Real Madrid have finally come to an agreement over the transfer of Spain goalkeeper David de Gea.

Guardiola to swap Hart for Schmeichel

It's fair to say that Pep Guardiola's first season in charge at Manchester City has been turbulent. There were signs of that early on when the Spanish manager made the controversial decision to loan out long term goalkeeper Joe Hart. Despite City struggling in that department all season, it appears that the England goalkeeper still has no future at the club.

With second place guaranteed in this season's Premier League, Tottenham Hotspur could have taken their foot off the pedal at Leicester on Thursday. That certainly wasn't the case, as the North London club scored six against Leicester City.