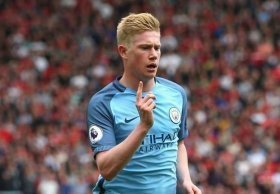 Man City player Kevin de Bruyne faces career-defining match with Belgium's 'golden generation'
... old." De Bruyne has won almost all there is to win at City, four Premier League crowns perhaps making up for the absence - so far - of a ...
01/12 07:00

Manchester City have no plans of parting ways with Raheem Sterling in January amid interest from Barcelona and Arsenal.

Chelsea midfielder Jorginho has said that Manchester City's Kevin de Bruyne would be his leading candidate for the Ballon d'Or.

Chelsea face off against Manchester City in the Champions League final in Lisbon tonight.

Manchester City star Kevin de Bruyne could be unavailable for the club's Premier League clash against Arsenal this weekend.

Manchester City manager Pep Guardiola has provided an update on the fitness of Kevin de Bruyne ahead of the club's Premier League clash against Arsenal on Wednesday.

Manchester City midfielder Kevin de Bruyne has reportedly ruled out his departure from the Etihad this summer.

What next for City after their ban?

Last week, Man City received the news of a two year European football ban for alleged “serious breaches” of UEFA’s financial fair play rules. Alongside the ban, City receive a large financial hit with a fine of 30 million euros and, despite City’s right to appeal the ruling, the club now look set to lose some of the top stars at the club who seek regular Euroepan football.

Real Madrid are reportedly set to go all out for Manchester City winger Raheem Sterling in the summer.

Can Liverpool Take the English Premier League Lead to the Wire?

Only eight games in and the English Premier League already looks won. Liverpool, the European champions and last season’s EPL runners up have a 100 percent record after collecting maximum points in their opening fixtures.