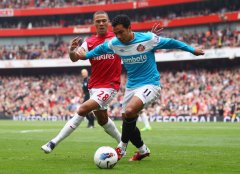 Kieran Richardson "can see" Jack Grealish at Manchester United
four assists in 15 Premier League appearances this season, has recently been linked with a move to Old Trafford....
14/12 19:05

Aston Villa coach Paul Lambert admits that the club are still looking to sign new players ahead of the upcoming league season. The Villans could be about to sell Ron Vlaar to Southampton and subsequently Villa will look to bring in a new centre back.

Fulham and Aston Villa have come to an agreement on the transfer of left sided midfielder Kieran Richardson. The 29-year-old will sign a two year contract at Villa Park.

O'Neill not planning any Sunderland sales

Sunderland manager Martin O'Neill will not be selling any of his players in the January transfer window, despite reports that Stephane Sessegnon is unhappy on Wearside, and that Arsenal are chasing midfielder Kieran Richardson.

Versatile Sunderland player Kieran Richardson has been linked with a surprise move to Arsenal. The former Manchester United player is comfortable playing both on the left of midfield or defence; and Arsene Wenger is reportedly considering a move for Richardson as he faces a full back injury crisis.

Both teams are in dire need of a win after poor starts to their respective seasons. Eyefootball discusses how the teams will line up, their form and their historical record against each other.

Dennis Wise could be set for the chop at Newcastle United, as owner Mike Ashley starts afresh and begins a clean out at the troubled Toon side. It is understood Ashley is unimpressed with Wise's contribution since arriving at the club.

Newcastle United had made a cheeky offer for Kieran Richardson in the January transfer windows. The Toon reportedly made an enquiry about the availability of the former Man Utd player.

Martin O'Neill still remains optimistic his side can qualify for Europe, but the visit of Sunderland is never a walk over and Villa Park will need to be a fortress today if they are to move closer to that European qualification - Villa are seven points away from Everton who are fifth.

A crucial battle between two Premiership relegation battlers takes place on Saturday as Steve Bruce's Wigan travel to Roy Keane's Sunderland. Both have identical records and are 2 points above the relegation zone.

Sunderland boss Roy Keane has confirmed that young midfield starlet Kieran Richardson will be out of action for three weeks after hurting his hamstring in training. Richardson has been in inspired form of late, grabbing a hattrick for the Black Cats.

Portsmouth proved that the African Nations Cup was going to effect their Premiership European hopes this season as they fell to a 2-0 loss at the Stadium of Light as Sunderland winger Kieran Richardson bagged an excellent brace.

Chelsea midfielder Michael Essien has revealed that he once spent a week long trial at his boyhood favorite team, Manchester United. Whilst at Man Utd, Essien trained with Kieran Richardson among others, and revealed how close he was to actually joining the Reds.

Sunderland and Aston Villa go head to head at the Stadium of Light with the Black Cats looking to pick up points to help ease them off the bottom end of the table, whilst Villa will be looking for a recovery after their 3-1 home defeat to Portsmouth last weekend.

Chelsea take on Sunderland at Stamford Bridge in a hugely important game for both sides who are at different ends of the Premier League. Sunderland got a win last time out vs. Derby, but getting one over the Premiership's "form" team will be a tough one.