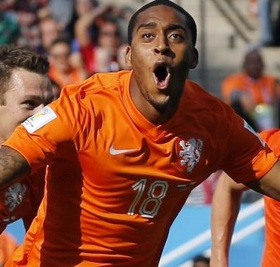 Sunderland are reportedly keen on a summer deal for Napoli midfielder Jonathan Guzman.

Sunderland manager Dick Advocaat has insisted that Queens Park Rangers midfielder Leroy Fer will not join the club this summer.

France international Yann M'Vila is close to sealing a summer move to Sunderland, according to reports.

Queens Park Rangers manager Harry Redknapp announced the signing of Leroy Fer yesterday and told reporters that capturing the Dutchman's signature is a massive coup for his club.

Queens Park Rangers have moved a step closer to wrapping up a deal for Norwich City midfielder Leroy Fer today, after the two clubs agreed an 8 million pounds transfer fee.

Leroy Fer is a target for Southampton this summer, as manager Ronald Koeman prepares to rebuild his squad after a transfer window of several high profile departures. The 24-year-old Dutchman has asked Norwich City for a transfer.

Newcastle manager Alan Pardew will be delighted to hear that he appears to have won the race to sign Monaco forward Emmauel Riviere; beating West Brom and Tottenham to the striker's signature.

Southampton manager Ronald Koeman has reportedly contacted Norwich City regarding the availability of Dutch midfielder Leroy Fer.With Morgan Schneiderlin linked with a move out of St Mary's, Fer has been mentioned as a potential replacement.

Sunderland to bid for Leroy Fer?

Sunderland manager Gus Poyet has reportedly made an enquiry to Norwich City regarding the availability of Dutch midfielder Leroy Fer.

Newcastle to bid for Leroy Fer?

Newcastle manager Alan Pardew wants to sign Dutch midfielder Leroy Fer from Norwich City. The creative midfielder has told his agent that he wants to leave the relegated Norfolk side.

Norwich City manager Chris Hughton has expressed his delight at the performance of the club's summer signing Gary Hooper following his brace during the Canaries' 3-2 win over Watford in the Capital One Cup yesterday.

Sweden striker Johan Elmander scored twice on his first start for his new club Norwich City, as the Canaries thrashed Bury 6-3 in their Capital One Cup encounter.

Norwich have completed a deal for Dutch midfielder Leroy Fer. The 23-year-old has signed a four year contract at Carrow Road. Fer had been linked with a move to Everton in January, but he then failed a medical.

Everton are in the race to sign Sevilla's 27-year-old striker Alvaro Negredo, and have reportedly had an offer accepted by the Spanish club already.