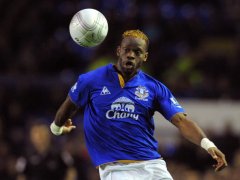 Louis Saha reveals how Manchester United can challenge for the title

Manchester United favourite Louis Saha has talked up the prospect of Pierre-Emerick Aubameyang playing for the Red Devils next season.

Former Manchester United star Louis Saha has said that the Red Devils have just one world-class player in the form of Paul Pogba in their first-team squad.

Former Manchester United star Louis Saha has urged Anthony Martial to remain at Old Trafford and fight for his position under Jose Mourinho.

Former Manchester United striker Louis Saha feels that young forward Anthony Martial has all the ingredients to match the great Thierry Henry in years to come.

Former Manchester United striker Louis Saha has announced his retirement from professional football. The Frenchman announced the decision after his short stint with Serie A side Lazio came to an end.

Harry Redknapp, the favourite to succeed Fabio Capello as England manager, has pledged his future to Tottenham despite intense media speculation linking him with a move away from White Hart Lane. Redknapp saw his Spurs side cruise to a 5-0 win over Newcastle on Saturday.

Tottenham have given permission for Roman Pavlyuchenko to leave White Hart Lane, and the Russian striker is believed to have agreed terms with Lokomotiv Moscow last night. Spurs have already brought in Louis Saha as a replacement for the striker.

Tottenham have completed a move for Blackburn defender Ryan Nelsen. The New Zealand international centre back has put pen to paper on an 18 month contract at White Hart Lane, and has been given permission to join Spurs as a deal was completed in time before the transfer deadline last night.