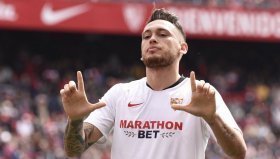 Sevilla considering Nicolas Pepe, Lucas Ocampos swap with Arsenal?
, Pepe has started just five Premier League games this term - the most recent of which came in October's draw with Crystal Palace - and he
10/05 13:10

Liverpool are reportedly prepared to offer Takumi Minamino as a makeweight to sign Lucas Ocampos from Sevilla this summer.

Manchester United are reportedly considering a move for Lucas Ocampos from Sevilla following their failed pursuit of Jadon Sancho.

Borussia Dortmund attacker Jadon Sancho is unlikely to force through an exit amid the transfer interest from Manchester United.

Liverpool have shown interest in signing highly-rated Monaco winger Lucas Ocampos, according to a report.

Chelsea are reportedly readying a January offer for Monaco's Argentinian winger Lucas Ocampos, according to The Star.

Chelsea are closing in on a deal for Argentine 17 year old Lucas Ocampos. The River Plate winger is considered one of the finest youngsters in South America, and is believed to be on the verge of signing a 5 year contract at Stamford Bridge.

Arsenal and Man Utd are both chasing the signature of Lucas Ocampos, the talented Argentine 17 year old winger currently playing for River Plate. The Premier League sides are weighing up a 7m move.