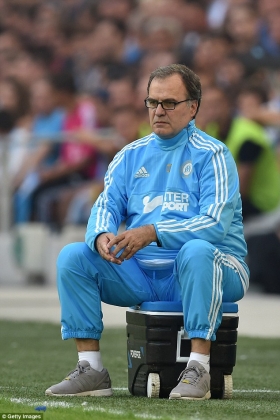 ‘Can I say’: Ian Wright has said something controversial about Marcelo Bielsa at Leeds
if they’d pulled the trigger on Bielsa sooner. In other news, Willian's nightmare move and 4 more of Arsenal's worst ever transfer deals
18/05 07:00

Manchester United manager Ralf Rangnick has confirmed that Edinson Cavani and Tom Heaton will be sidelined for the Premier League trip to Leeds United.

Daniel James has made the switch from Manchester United to Leeds United for a reported fee of around £25m.

Manchester United winger on his way to Leeds United

Manchester United winger Daniel James is set to make the move to Leeds United, according to Fabrizio Romano.

Chelsea are willing to offload Michy Batshuayi on a permanent deal this summer.

Leeds United winger Raphinha has expressed his satisfaction at the west Yorkshire outfit amid the speculation linking him with Liverpool and Manchester United.

Arsenal are scheduled to host Leeds United in the Premier League on Sunday.

Leeds United are reportedly exploring the possibility of signing Fikayo Tomori on a short-term loan from Chelsea.

Leeds United to miss out on signing Chelsea defender

Leeds United will reportedly miss out on signing Fikayo Tomori on loan with the Chelsea defender on his way to Rennes.

Leeds United could reportedly make an attempt to sign Daniel James from Manchester United during the January transfer window.

Leeds United are reportedly monitoring the situation of Fikayo Tomori ahead of a potential loan move during the January transfer window.

Leeds United are looking into a possible loan move for Barcelona midfielder Riqui Puig, a report from Sport claims.

Could Leeds reignite their interest in John Stones during the January window?

Leeds United face a critical few months ahead as they look to carry on acclimatizing to life back in England’s top-flight. After a blistering start that turned many heads, the Whites have recently been on the receiving end of some humbling defeats that have brought the West Yorkshire side down to earth again. Although you do get the feeling that Marcelo Bielsa’s squad aren’t prone to getting above their station.

Rennes' star winger Raphinha will make a permanent transfer to Leeds United today, with the 23-year-old Brazilian starlet set to sign a four year contract with the Elland Road outfit. The former Sporting Lisbon and Vitoria Guimaraes player will finally complete his on/off move to Leeds United this evening just as the transfer deadline nears.

Leeds United have reportedly made a late £25m offer for the services of Manchester United forward Daniel James.

Leeds United are looking at the prospect of signing Chelsea youngster Conor Gallagher on a permanent deal this summer.