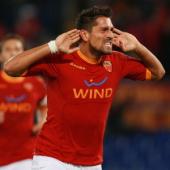 Italian side Cagliari have completed a move for Dutch right-back Gregory Van Der Wiel on a three-year contract. The Italian side have agreed on a package with Turkish club Fenerbahce.

Ishak Belfodil is understood to have arrived in London to complete his loan switch to Championship side Queens Park Rangers. The 22 year old has fallen out of favor with new Inter coach Walter Mazzarri of late and is looking at game time ahead of World cup in Brazil.

West Ham United have landed the services of Italy international Marco Borriello on loan from AS Roma for the rest of the season.

West Bromwich Albion's new manager Pepe Mel is hoping to sign Marco Borriello. The Roma striker, who spent last season on loan at Genoa, has 18 months left on his contract at the Italian club.

West Ham manager Sam Allardyce's efforts to bolster his squad before the end of the transfer window look set to come to fruition as reports from Italy indicate the Hammers are on the cusp of agreeing a loan deal for AS Roma forward Marco Borriello.

AS Roma forward Marco Borriello is actively seeking a new club to play for, with the Italian forward telling club directors that he would prefer a move to a team where he is guaranteed regular first team football.

Aston Villa and Marseille are both planning January transfer moves for AS Roma striker Marco Borriello. Both teams are planning to strengthen their attack during the up coming transfer window, with a fee of around 6m GBP suggested.

Reports from Italy indicate that Fulham have made a shock offer for Marco Borriello, the Roma striker who is now deemed surplus to requirements at the Serie A side.

Marco Borriello looks set to join AC Milan as his agent Tiberio Cavalleri has confirmed that a deal looks to be in place to bring the player back to the club. An impressive goalscoring season has seen Borriello's stock rise significantly.

Man City striker Valeri Bojinov could be set for a return back to Serie A after it emerged that Genoa were interested in landing the Bulgarian forward. Bojinov missed the majority of the season for City with injury.

Genoa's impressive forward Marco Borriello has revealed he has no intentions of joing AC Milan in the summer as a backup striker, but would be interested to join Milan if he was guaranteed a starting role.

The AC Milan star striker 'Pippo' Inzaghi has today questioned Roberto Donadoni's decision to leave him out of the provisional squad.

Chelsea striker Andriy Shevchenko looks unlikely to be heading for a move back to AC Milan. The Ukrainian striker has been consistently linked with a return to the San Siro, but Milan boss Carlo Ancelotti has ruled out the move.

Borriello to stay at Genoa

Genoa vice president Giovambattista Pastorello has insisted that Serie A top scorer Marco Borriello will be staying at the club next season. Borriello has 17 goals to his name and Fiorentina and West Ham have been linked with a move for the player.

Pato on the double for Milan

Alexandre Pato was the hero for Milan at the San Siro as they defeated Genoa 2-0 in their Serie A match. The Brazilian wasted a couple of great chances, but that didn't stop him being the hero.