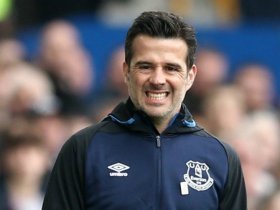 2 Fulham players who face an uncertain few weeks ahead
have an exciting summer ahead of them following their promotion to the Premier League. With Marco Silva’s task now to build a squad capable
26/05 18:55

Arsenal have reportedly added Vitor Pereira to their shortlist of managerial targets to replace Unai Emery as the next head coach of the club.

Everton manager Marco Silva has acknowledged that Manchester United were one of the clubs in the running to sign Richarlison during last summer's transfer window.

David Moyes has clearly stated that he has no ambition of becoming the next manager at Everton or West Ham United unless he is offered with a long-term deal.

David Moyes is reportedly the favourite to replace Marco Silva as the new head coach of Everton.

Everton to part company with Moise Kean in January?

Everton are ready to let Italian international striker Moise Kean depart the club in the January transfer window. The Goodison Park outfit, who signed Kean from Juventus just this past summer, is ready to part with the forward for a fee of 30 million euros.

Bournemouth midfielder Lewis Cook appears to be a top transfer target during the January transfer window for a number of Premier League sides, with the likes of Everton and Wolves both rumored to have expressed interest in the 22-year-old. Cook, who has forced his way in to Eddie Howe’s side in recent months, is seen as one of Europe’s best up and coming centre midfielders.

Everton have submitted a late offer for Crystal Palace forward Wilfried Zaha ahead of Arsenal's rumoured interest in the Ivory Coast international. The winger, who has recently been linked with a move away from the Eagles, had been desperate for a transfer to the Gunners but Arsenal's bid of £40 million has been rejected.

Chelsea manager Frank Lampard has ruled out the potential sale of defender Kurt Zouma to Everton by stating that he would like to work with the Frenchman during the forthcoming campaign.

Everton have sent 23-year-old wantaway striker Sandro Ramirez back to his homeland of Spain on a loan deal to La Liga minnows Real Valladolid, with a view to a permanent transfer next summer. Ramirez joined the Toffees back in July of 2017, but has failed to live up to expectations and the club have announced his loan departure this morning.