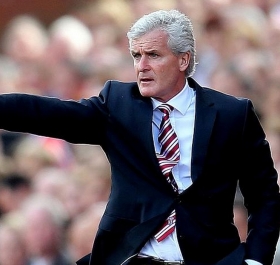 Manchester United favourite Paul Ince has said that Ole Gunnar Solskjaer is being overly appreciated for his efforts with the Red Devils and he could have done a similar role, had he been offered the managerial position.

Southampton are reportedly looking into an approach for Chelsea's Gary Cahill as they seek to shore up their defence at the turn of the year.

Southampton are reportedly on acquiring the services of Danny Ings from Liverpool, though they are only willing to pay half of the marksman's price tag.

Southampton have become the latest English club to express an interest in signing midfielder Jack Wilshere from Arsenal this summer.

Southampton manager Mark Hughes has put pen to paper on a new three year contract with the Saints, having guided them to Premier League safety last season. The former Stoke City manager only made the move to St Mary's in February and managed to keep Southampton in the top flight by the penultimate game of the league season.

Southampton to bid for French youngster

French club Lyon are coming to terms with the fact that Premier League club Southampton, who guaranteed their survival in the top flight this week with an important victory over rivals Swansea City, are to bid for striker Willem Geubbels. The 16-year-old has broken several records since his emergence on to the scene and is in fact the first player born in the 21st century to have played in UEFA's Europa League.

Chelsea striker Olivier Giroud has declared the Blues should be proud of their stellar comeback against Southampton in the Premier League on Saturday.