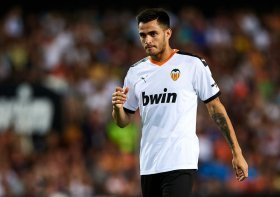 Newcastle interested in Maxi Gomez
own Suarez Managing to secure the former West Ham United target would no doubt be a major coup for the Premier League side, with the £10.8m
09/08 13:07

Arsenal to swoop for Valencia forward?

Arsenal have identified Valencia forward Maxi Gomez as a potential candidate to bolster their attack during the January transfer window.

Arsenal are among the clubs interested in signing Maxi Gomez from Valencia during the January transfer window.

West Ham are hopeful that a deal can be reached to sign long-term target, Maxi Gomez, from Celta Vigo. It is understood that Valencia are also trying to sign the Uruguayan striker.

Chelsea, Liverpool to battle it out for Celta Vigo striker?

Chelsea are prepared to go head-to-head with Premier League rivals Liverpool in the race to sign Celta Vigo's Maxi Gomez at the end of the season.

West Ham United have reportedly emerged as fresh candidates to prise away Olivier Giroud from Chelsea before the closure of the winter transfer window.