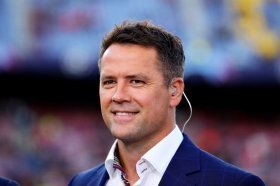 Quiz! Can you name the Arsenal line-up from the FA Cup final against Chelsea in 2002?
... had lost the final to Liverpool and a Michael Owen smash-and-grab. The year after, they'd retain the trophy against Southampton. But this ...
27/01 11:49

Former Liverpool star Michael Owen has given his prediction for the upcoming Premier League clash between Arsenal and Chelsea.

Former Manchester United and Liverpool star Michael Owen has made a surprise claim by stating that the Red Devils are not far off from the quality of Jurgen Klopp's side.

Liverpool legend-turned-pundit Michael Owen has said that the Reds will be under more pressure for the Champions League final when compared to Tottenham Hotspur.

A true great or underachiever? A look back at Wayne Rooney’s international career

It is one of the most perplexing mysteries in the world of football. The career of Wayne Rooney is undoubtedly one of the sport’s finest, as he burst into the spotlight at the age of 16 and solidified himself into his country’s record books as one of the most talented and prolific goal scorers to pull on the white jersey of the Three Lions.

Manchester City teenage sensation Gabriel Jesus has undergone surgery in Barcelona on his broken metatarsal, which was picked up during Manchester City's 2-0 victory over Bournemouth on Monday.

Welbeck could be the signing of the summer: Owen

Newcastle United have completed the £12 million signing of Remy Cabella from French side Montpellier.

Former England international Michael Owen has insisted that the Argentine national side are the front-runners to win the World Cup this summer, given the excellent form of their forwards in Lionel Messi and Sergio Aguero.