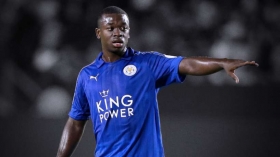 Nampalys Mendy, who had been originally signed by the Foxes to replace N'Golo Kante, has been allowed to leave Leicester City on a loan deal. Mendy has joined Nice on a temporary spell with a view to a permanent transfer in 2018.

Mendy wants to leave the Premier League just a year after joining Leicester and has expressed his desire to play for Ligue 1 side, Bordeaux.

Arsenal in talks with Nice midfielder

Arsenal have reportedly held preliminary talks with the representative of Nice midfielder Jean Michael Seri ahead of a potential move for his signature in the summer.

Why Ranieri deserved to be sacked

On May the 2nd 2016, Tottenham blew a two goal lead against Chelsea and the most surprising champions in Premier League history were crowned and all masterminded by Claudio Ranieri.

Leicester City are prepared to lodge a winter bid for Gremio midfielder Walace Souza Silva. The 21-year-old is seen as a long-term replacement for N'Golo Kante who left for Chelsea in the summer.

Leicester City boss certain that they can replace Kante

Leicester City manager Claudio Ranieri has ensured the club's supporters that they will be able to replace the departed N'Golo Kante, who joined Chelsea this month. The French international joined the Blues in a 50 million GBP transfer deal.

French midfielder Nampalys Mendy has completed his long awaited move to Leicester City. The 24-year-old has inked a four-year contract with the Premier League holders.

English champions Leicester City have settled personal terms with Nice midfielder Nampalys Mendy ahead of his move to the King Power Stadium. The Frenchman has been earmarked as a potential replacement for the unsettled N'Golo Kante.

Is N'Golo Kante heading to Arsenal?

France international N'Golo Kante has been linked with a potential move to the Emirates with Leicester City seemingly close to wrapping up a deal for Nice midfielder Nampalys Mendy.

Leicester City had an £8m bid for the tough tackling holding midfielder rejected last summer before swooping on another French club, Caen, for the now super in demand French international N’Golo Kante.

Manchester United are interested in a move for the "new Makelele", Monaco midfielder Nampalys Mendy. The 20-year-old defensive midfielder could be sold for around 8 million Euros.