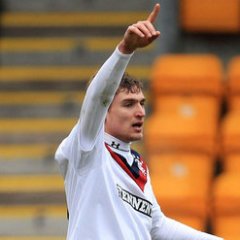 Nikica Jelavic on the Rangers joke that changed everything as he dismisses 'bull***t' transfer claim
in 56 games for the club. He left for Everton in 2012 having won a Scottish Premier League title and League Cup, and remains a popular
28/10 08:38

West Ham are reportedly ready to make an offer for the Liverpool flop, Mario Balotelli.

West Ham United are thought to have agreed a transfer sum to sign Hull City striker Nikica Jelavic, according to reports.

West Ham United are lining up a bid for Hull City striker Nikica Jelavic, according to reports.

West Ham United manager Slaven Bilic is planning a move for his counterpart Nikica Jelavic as he seeks to bring in a new striker this summer.

Hull City are making a move for Ghana international defensive midfielder Sulley Muntari. The 29-year-old could be allowed to leave for around 3 million GBP.

Everton have been told to pay £3m for Kenwyne Jones by Premier league rivals Stoke City. However the toffees only want to pay £1m for the striker who is out of contract in the summer.

Everton forward Nikica Jelavic is heading to Hull City tonight to discuss personal terms with the Tigers and club manager Steve Bruce after the two clubs agreed on a transfer deal for the player.

Everton striker Nikica Jelavic has been linked with a move to Crystal Palace. The Eagles' manager Tony Pulis has identified the striker as a potential January transfer target.

Croatian international Nikica Jelavic is apparently linked with a move to Stoke City in January, according to The Daily Mail.

Everton's out of favour striker Nikica Jelavic could be set for a move to West Ham. The Hammers are desperate to bring in a forward on loan and Jelavic's first team opportunities at Goodison appear limited.

WBA have had a bid turned down for Nigeria international striker Victor Anichebe. Steve Clarke had hoped to sign the forward from Everton and had an offer of £3.5 million rejected.

Everton manager Roberto Martinez has sent a scout to monitor FC Nantes' striker Filip Djordevic in action. The 25-year-old Serbian international has been with the French club since 2008.

German side Hamburg will be unable to finance a move for Everton's striker Nikica Jelavic. The former Rangers forward has been one of several top strikers linked with a transfer to the Bundesliga side.

Stoke City are preparing to make a £5million bid for Hamburg striker Artjoms Rudnevs, according to reports from the Daily Mail. The Latvian forward has been set as the number one target by Potters' manager Mark Hughes.