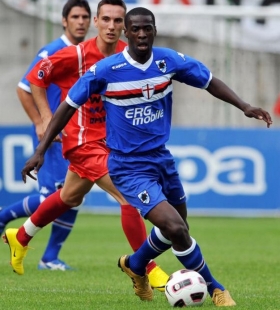 How Marko Arnautovic, Pedro Obiang and the players West Ham sold in 2019 are getting on
to see off Chelsea in the Super Cup and then made a howler against Bournemouth on his first league start to gift them a...
10/05 12:00

West Ham have rejected an offer from Serie A side Fiorentina for midfield player Pedro Obiang. The former Sampdoria player is rumoured to be interested in a return to Italy and it is understood that the Hammers have rejected a 14 million euro offer from the Viola.

West Ham United are reportedly confident of extending the contract of Manuel Lanzini following his excellent prowess in the Hammers shirt last season. The Argentine was named the club's player of the campaign last term.

Everton manager Roberto Martinez is keeping a close eye on the progress of Sampdoria midfielder Pedro Obiang, according to reports from Italy this morning. The Toffees have deployed scouts to watch the 22-year-old twice in the last three months.