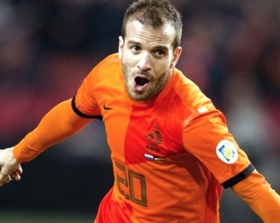 Former Tottenham player and club legend Rafael van der Vaart has urged the Spurs’ club board to make a transfer move to sign Hakim Ziyech from Ajax Amsterdam at the next available opportunity. The attacking midfielder, who helped Ajax to the Champions League semi-final just last season, is seen as one of Europe’s brightest prospects and several top Premier League teams have been linked with a move for the young Dutch starlet.

Rafael Van Der Vaart has completed a move to Danish FC Midtjylland. The 33 year old midfielder is reported to have signed a two year deal with the club after leaving Real Betis, where he fell out of favour with head coach Gus Poyet.

Ajax are reportedly considering a move to re-sign former midfield star Rafael van der Vaart at the end of the season.

Dutch international midfielder Rafael van der Vaart will miss the World Cup in Brazil after sustaining an injury during training in the country's training camp in Portugal.

London rivals Chelsea and Tottenham opened Saturday afternoon's Premier League action with a 0-0 draw at Stamford Bridge. The result will leave Harry Redknapp the happier manager, as his side now remain 5 points ahead of the Blues in the Premier League.

Tottenham attacking midfielder Rafael van der Vaart yesterday admitted that losing to North London rivals Arsenal 5-2 last weekend is a bitter blow to Spurs' hopes to finish 3rd in the league, but the Dutchman is sure they will finish ahead of their biggest rivals.

Tottenham boss Harry Redknapp has said that Steven Pienaar will not be sold. The South African international midfielder had been linked with a move away from White Hart Lane, but his manager wants to keep the 29 year old until the end of the season.

Tottenham's creative midfielder Rafael Van Der Vaart has officially ruled out a move away from White Hart Lane in January, insisting that he is more than happy at the club.

Aston Villa manager Alex McLeish has contacted Tottenham regarding the availability of out of favour midfielder Steven Pienaar. The former Everton creative midfielder has played just 8 games since arriving at Spurs last year.

Tottenham midfielder Rafael van der Vaart will be missing for at least a month after picking up a hamstring injury in Spurs' last game against Chelsea at Stamford Bridge.

Rafael van der Vaart has backed his Tottenham manager Harry Redknapp for the England job, once Fabio Capello steps down afte the Euro 2012 tournament. The Dutchman thinks Redknapp is the front runner for the soon to be vacant role.

Tottenham manager Rafael van der Vaart has laughed off speculation that linked the Dutchman with a move away from White Hart Lane next summer. The 28 year old instead insists his long term future will remain with Spurs.

Tottenham climbed up to 5th in the Premier League table after a convincing 3-1 win against QPR at White Hart Lane. The game saw Gareth Bale and Rafael Van der Vaart both get on the scoresheet.

Whilst Blackburn fans scream for Steve Kean's resignation from the terraces; this week Tottenham coach Harry Redknapp offered support for his counterpart. Redknapp realistically must know a Spurs win could mean the end of the road for Kean. Defeat would see Rovers rooted to the very bottom of the table.