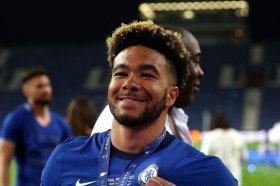 Reece James makes big prediction about sister Lauren
... Manchester United and made a name for herself as one of the brightest young talents in women’s football. Lauren returned to Chelsea in 2021 ...
01/12 15:15

Chelsea are prepared to re-open contract negotiations with midfielder Mason Mount in the New Year.

Chelsea to swoop for Netherlands defender?

Chelsea could make a fresh approach to sign Inter Milan defender Denzel Dumfries at the turn of the year.

Chelsea have reportedly stalled in negotiations over a new contract with midfielder Mason Mount.

England manager Gareth Southgate has explained the decision to pick Conor Gallagher for the World Cup in Qatar.

Chelsea have been handed a boost in signing Denzel Dumfries ahead of the January transfer window.

Chelsea defender Reece James has admitted that he is devastated after missing out on England's 26-man squad for the World Cup.