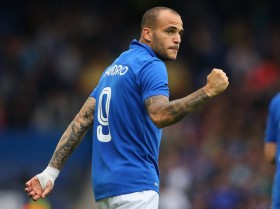 Why Everton might have to repeat Sandro Ramirez transfer this summer
than two minutes remained in the transfer window when Spanish club SD Huesca announced they had agreed a deal with Everton. At just before
29/05 05:23

Everton have sent 23-year-old wantaway striker Sandro Ramirez back to his homeland of Spain on a loan deal to La Liga minnows Real Valladolid, with a view to a permanent transfer next summer. Ramirez joined the Toffees back in July of 2017, but has failed to live up to expectations and the club have announced his loan departure this morning.

Everton manager Sam Allardyce has reportedly earmarked Arsenal attacker Theo Walcott as one of his prime targets for the January transfer window.

Everton are reportedly plotting a winter move for Bournemouth's Joshua King, in order to fill the void left by former striker Romelu Lukaku.

Niasse, who less than a year ago was ousted from the team by Ronald Koeman, may have just saved the Dutchman's job after his brace gave Everton their first win in the Premier League after four games.

Outgoing Chelsea striker Diego Costa knocked back advances from Everton during the final days of the summer transfer window.

Everton will reportedly lodge an attempt to prise away Danny Welbeck from Arsenal, should they fail to broker a deal for teammate Olivier Giroud.

Marseille yet to give up on Arsenal striker

French club Marseille are still in the hunt to sign Arsenal striker Olivier Giroud, who was sparingly used in the starting lineup last season.

Everton are reportedly deemed favourites to pursue Olivier Giroud this summer with Borussia Dortmund opted against the sale of Pierre-Emerick Aubameyang.

Swansea City attacker Gylfi Sigurdsson is set to snub advances from Leicester City for a switch to Everton during this summer's transfer window.

Gylfi Sigurdsson has withdrawn from Swansea's pre-season tour of the United States and will complete his move to Everton in the coming days.

Everton boss Ronald Koeman has identified Christian Benteke as a potential candidate to replace Romelu Lukaku, who sealed his move to Manchester United earlier in the week.

The long-running transfer storyline concerning Michael Keane's future came to a close on Monday when he completed his move from Burnley to Everton in a deal that will see The Toffees pay up to £30 million.