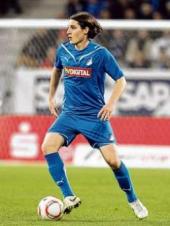 Man City stars at risk of SUSPENSION? Which FIVE players could miss Schalke second leg?
and Guardiola will not want to lose him for the clash at the Etihad. Schalke have two players at risk as well - midfielders Sebastian Rudy
20/02 16:46

Chelsea to compete for Renato Sanches?

Chelsea have reportedly joined the pursuit of Bayern Munich midfielder Renato Sanches. The Portugal international is available on a temporary deal this summer after having failed to establish himself as a regular under Carlo Ancelotti last term.

Manchester United could lose out on Renato Sanches for the second summer running with AC Milan close to sealing a permanent deal with Bayern Munich.

Hoffenheim defender Niklas Sule has confirmed that he turned down a move to Chelsea in order to link up with Bayern Munich at the end of the campaign.

Queens Park Rangers could make a move for German youngster Sebastian Rudy in the January transfer window. The Hoffenheim midfielder is one of the most highly rated prospects in the Bundesliga.