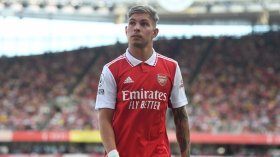 Arsenal midfielder Emile Smith Rowe has been left out of the FA Cup fourth round tie at Manchester City after a fresh injury.

Arsenal manager Mikel Arteta has confirmed that Marquinhos won't play any part against PSV Eindhoven in the Europa League tomorrow.

There are concerns that Bukayo Saka may not be a part of the game against Southampton this weekend, after the England star picked up a knock during the game with PSV Eindhoven. Saka appeared to hold his calf during the game, but replays showed that a rival player's studs hurt Saka.

Arsenal manager Mikel Arteta has confirmed that Oleksandr Zinchenko has picked up a fresh muscle injury in training.

Arsenal will be without three players for tomorrow's Europa League group stage meeting against Bodo/Glimt.

Arsenal have suffered a big injury blow ahead of their Premier League clash against Tottenham Hotspur this weekend.

Arsenal have received a double injury boost ahead of their Premier League meeting against Leicester City this weekend.