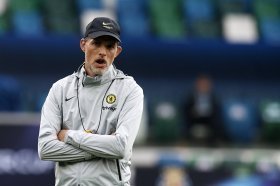 Chelsea are set to go head-to-head with Tottenham Hotspur in the race to sign Everton attacker Richarlison this summer.

Chelsea get to know Juventus' demands for De Ligt

Juventus are prepared to sanction the sale of Matthijs de Ligt to Chelsea, provided their transfer demands are met.

Chelsea not giving up on Ousmane Dembele

Chelsea manager Thomas Tuchel is in constant contact with the representatives of Raheem Sterling over a summer move.

Chelsea are favourites to sign defender Matthijs de Ligt, who has refused to pen a new deal at Juventus, Corriere dello Sport claims.

West Ham are interested in Chelsea's striker Armando Broja. He is the first target for West Ham as a new striker.

Chelsea are set to go head-to-head with Manchester United in the race to sign Juventus defender Adrien Rabiot this summer.

Barcelona attacker Ousmane Dembele is ready to join Chelsea if Thomas Tuchel can assure him with a starting role.