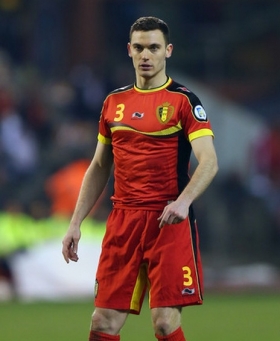 Spanish champions Barcelona are said to have leapfrogged Chelsea in the race to sign defender Daniele Rugani from Juventus at the turn of the year.

Barcelona defender Thomas Vermaelen could make a surprise return to the Premier League this winter with both Southampton and Watford interested in his signature.

Barcelona are reportedly considering an approach for Arsenal club-captain Laurent Koscielny when the transfer window reopens in a couple of months' time.

Spanish giants Barcelona are reportedly considering an approach to sign Chelsea's David Luiz when the transfer window reopens in the New Year.

Tottenham Hotspur midfielder Eric Dier has reportedly emerged as a potential target for Barcelona ahead of the transfer window at the turn of the year.

Barcelona's search for centre-back has taken them to Italy, and they are planning to raid Napoli. According to Corriere dello Sport (via Sky Sports), Napoli's asking price of £88 million hasn't deterred Barcelona in their pursuit of the Kalidou Koulibaly.

Thomas Vermaelen suffered an injury during the international break and will be out of action for six weeks as he joins Samuel Umtiti in Barcelona’s treatment room. Today’s edition of Mundo Deportivo claims the Belgian’s latest setback and the French defender’s physical situation has seen the Blaugrana track centre-backs for the January transfer window.

On October 10th, we carried a report from Mundo Deportivo, who claimed that Ajax defender Matthijs de Ligt has emerged as a priority Barcelona target and Netherlands coach Ronald Koeman ‘recommended’ the Blaugrana to secure his services.