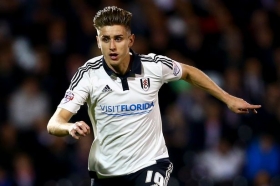 Everton without injured Dominic Calvert-Lewin for Fulham clash
Fulham travel to Everton looking for their first ever league victory at Goodison Park. Captain Tom Cairney remains sidelined, however, with
12/02 15:41

Manchester City were boasted as odds on favourites to lift the Premier League trophy again this season, and given their utter dominance in the league last term, it was an understandable assessment.

West Ham United have reportedly pulled out of the race to sign midfielder Yaya Toure during this summer's transfer window.

Championship club Fulham have announced that midfielder Tom Cairney has extended his stay at Craven Cottage by a further year.

Newcastle United will retain their interest in Fulham midfielder Tom Cairney after a failed approach for his services last winter.

Newcastle United will reportedly push for a deal for Fulham midfielder Tom Cairney when the transfer reopens in July.

Newcastle to return for Tom Cairney

Newcastle United are prepared to revive their interest in Fulham midfielder Tom Cairney when the season comes to a close.

The Tigers boss Steve Bruce has reportedly been linked with a move for West Ham's Alou Diarra as an option to boost his midfield.

32-year-old Diarra joined the Hammers in 2012, but he has only  three appearances for the London-based outfit and spent the second term of last season on loan with French Ligue 1 side Rennes.

Having allowed moves for Tom Cairney and Corry Evans from the KC Stadium to Championship club Blackburn Rovers this summer , Bruce is keen to have a midfield option on board which could give his team much more stability before the start of the new season, according to The People.

Norwich may move for Tom Cairney

Norwich City have identified Hull City midfielder Tom Cairney as a potential target for the January transfer window. The former Leeds United midfielder is very highly rated and valued by his club at around 1m GBP.