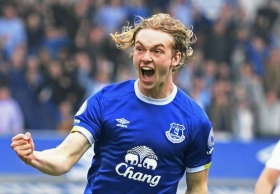 Soccer-Benitez urges Everton fans to back struggling team in Merseyside derby
), Yerry Mina (hamstring) and Tom Davies (knee) for the game at Goodison Park. "The problem for us was we were missing key players in key
30/11 15:19

Premier League holders Chelsea have identified Everton midfielder Tom Davies as a possible option to bolster their midfield ahead of the new season.

Anderlecht youngster Youri Tielemans has hinted that he could consider a switch to Everton while ignoring interest from top-profile Premier League clubs.