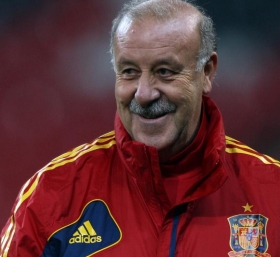 Tottenham Hotspur are willing to pay up to €45 million to sign Real Madrid midfielder Isco in January, according to reports in Spain.

Now the name Paco Jemez may not be a name most Premier League fans are familiar with but he was the man who recently topped a poll in the giant Spanish Marca newspaper to be the man to succeed Vicente del Bosque as the national team manager after the European Championships in the summer.

Manchester United goalkeeper David de Gea has insisted that he could back off on a summer move to Real Madrid, should Iker Casillas remain at the club.

Costa out of Spain's squad due to injury

Chelsea striker Diego Costa has been ruled out of Spain’s 2016 European Championship qualifier against Macedonia to be played on Monday due to a hamstring injury.

Arsenal winger Santi Cazorla feels the blame of Spain’s disastrous performance in the World Cup  this year should not be put on ‘tiki-taka’ and insists his side need not abandon it after a few disappointing outings.

We need to forget the World Cup, urges Costa

Spanish striker Diego Costa insists that it is important for his team to forget the disastrous World Cup campaign, and focus on their upcoming fixtures instead.

Real Madrid defender Sergio Ramos has backed Vicente Del Bosque to stay on as Spain manager after the World Cup.

Spain coach Vicente Del Bosque admitted that the 5-1 defeat at the hands of the Netherlands left him feeling physically sick yesterday. If there is any consolation for the Spaniards, it is the fact that the country also lost their opening game at the 2010 World Cup to Switzerland.

With three months to go until the highly anticipated World Cup finally kicks off in Brazil, there are a handful of interesting subplots and storylines developing already. These stories are what adds all the extra levels of intrigue into every match, creating new rivalries and adding fuel to the fire for existing ones.  Over the next 90 days or so, here are a couple storylines to keep your eyes on.

Arsenal's Spanish left-back Nacho Monreal is reportedly being targeted by a number of La Liga sides, with Valencia considered favourites to sign the talented defender during the winter transfer window.

Mikel San Jose is very quickly building himself a reputation in Spain as a tough-tackling, no nonsense centre back and national team coach Vicente Del Bosque has been monitoring the 22-year-old in action for Athletic Bilbao. The former Liverpool defender is fast becoming a world class defender back at his hometown club.

Vicente Del Bosque is the favorite to replace Luis Aragones; who has moved to Fenerbahce after failing to agree a deal with the Spanish football federation to stay on as boss after winning the Euro 2008 tournament.

Besiktas have had to fork out 6.7 million euros to the Spanish trainer Vicente del Bosque and his staff for dismissing them over two years ago.