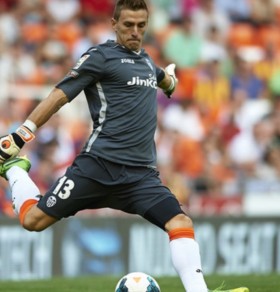 Crystal Palace goalkeeper Vicente Guaita's performances proving the best things in life are free
to his former teammate at Valencia, Santiago Cañizares. Only Liverpool, Manchester City and Chelsea have kept ...
10/07 17:29

Chelsea manager Frank Lampard has heaped praise on Tammy Abraham following his match-winning impact against Crystal Palace over the weekend.

Roy Hodgson is set to bring in Getafe goalkeeper Vicente Guaita as his first signing since taking over the Eagles. The shot stopper will arrive at the club in a £4 million deal next week and will be immediately assigned first-team duties.

Arsenal are reportedly readying a move for Valencia goalkeeper Vicente Guaita, according to Football Espana.