Last week, MUFC's David de Gea has committed himself to Manchester United by signing a four-year contract extension. He is the highest paid member of the Manchester United squad, reportedly worth £350,000 a week – including an option to extend for a fifth season.

It's no secret that the Man United players are rich as hell. But just how rich-as-hell are they?

How long does it take de Gea and the Manchester United squad to earn YOUR salary?

YouVsMUFC.com is a fun, interactive and informative website which enables visitors to enter their salary information to see how long it would take de Gea and the rest of the MUFC squad to earn their average salary, as well as providing some Interesting insights related to player salaries.

Simply in plug your annual earnings into the calculator, and you'll learn not only how much more de Gea, Pogba and co. make than you, but also how much they've made since you clicked on the calculator.

For example, I left the tab open for about 10 minutes while I made a piece of toast and some coffee. When I came back, Pogba had earned $1,000. And I don't even know if he is awake yet!

it would take David de Gea: 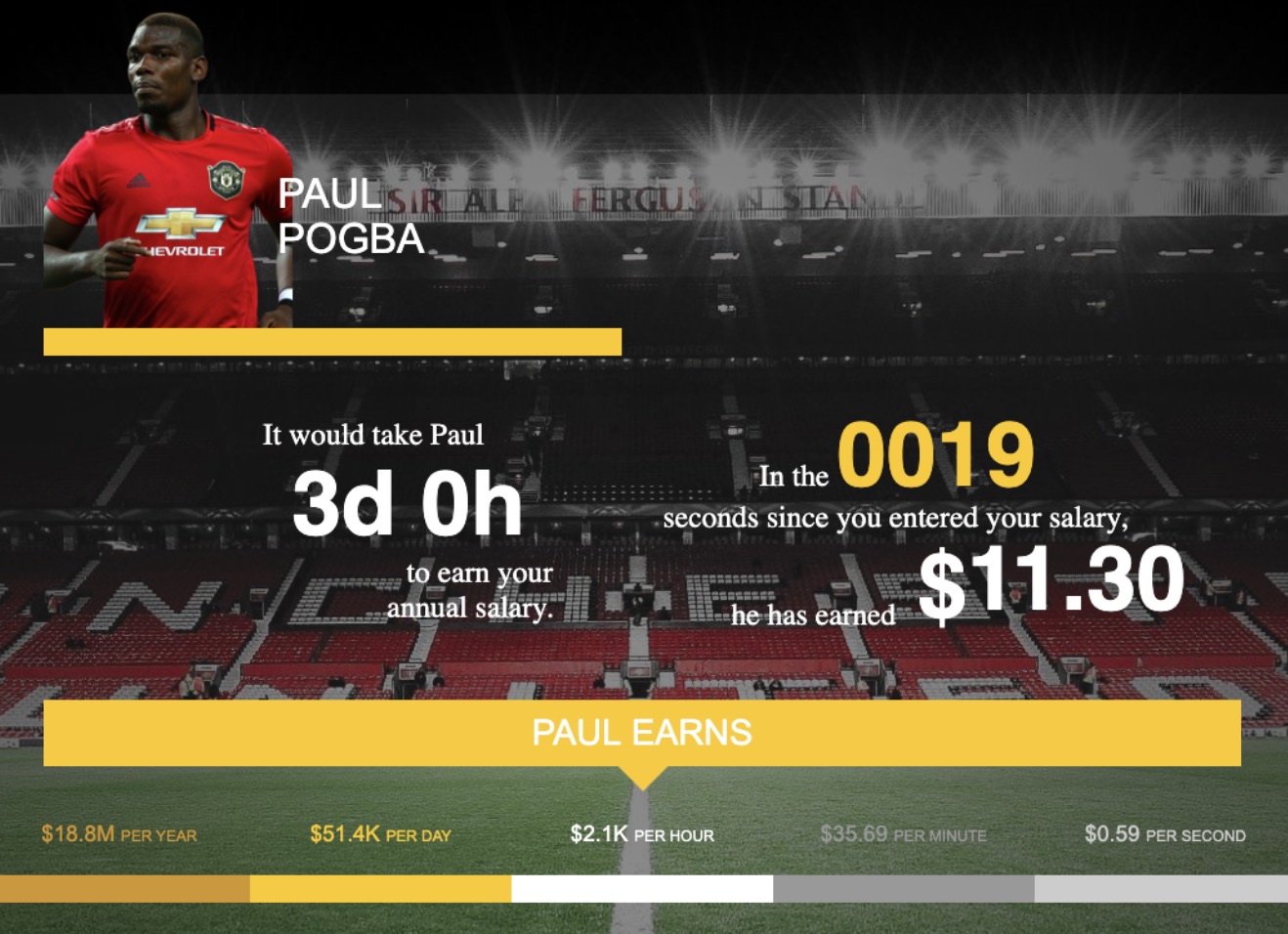 Jesse Lingard makes £75,000 a week , and launched his own clothing line, appropriately labeled as 'JLINGZ'. A plain white JLINGZ physicality t-shirt is listed online at £32. Lingard makes £10,714 a day with United. So if he wanted, he could buy around 335 t-shirts from his own line a day.
href="https://youvsmufc.com/jesse-lingard/ ">https://youvsmufc.com/jesse-lingard/

Marcus Rashford  just signed his new contract this year, which now pays him £200,000 a week and £10,400,000 per year. According to multiple reports, the average cost of earning your degree from the University of Manchester can get to as high as £25,000. With Rashy's high annual salary, how many kids could he send to college? Well, the answer is he could cover the expenses for 416 students.  https://youvsmufc.com/marcus-rashford/

Juan Mata is making £160,000 per week in his current deal with Manchester United. With the average price for a home in Manchester set at £188,411, he'd be able to buy himself a new home in under nine days of work.  https://youvsmufc.com/juan-mata/