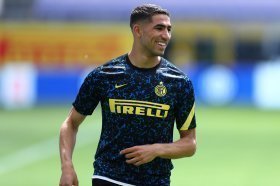 CHRIS SUTTON: Idrissa Gueye will harry Bernardo Silva before he can do damage, 19-year-old Nuno Mendes will give Riyad Mahrez a good test while Achraf Hakimi vs Jack Grealish promises to be an exciting tussle
as Manchester City knocked out Paris Saint-Germain last season KYLIAN MBAPPE V JOAO CANCELO Cancelo's highlights reel against Chelsea was
27/09 22:30

Arsenal defender Hector Bellerin is reportedly close to leaving the club with interest from Atletico Madrid and Inter Milan.

Romelu Lukaku has decided to stay with Inter Milan next season despite a lucrative contract offer from Chelsea.

Arsenal are prepared to part ways with Hector Bellerin if they receive a bid of around €20 million this summer.

Inter Milan are prepared to sanction the sale of Romelu Lukaku if any club meets their €120m valuation.

Liverpool are willing to pay around £25m to land the signature of Adama Traore from Wolverhampton Wanderers.

Arsenal are open to sanctioning the loan exit of Hector Bellerin, provided there is an obligation to buy next summer.

Arsenal and Tottenham Hotspur could compete for the signature of Inter Milan striker Martin Satriano this summer.

Paris Saint-Germain have reportedly won the race to sign Achraf Hakimi from Inter Milan this summer.

Chelsea to miss out on Achraf Hakimi?

Chelsea could miss out on the signature of Inter Milan defender Achraf Hakimi amid interest from Paris Saint-Germain.

Chelsea could include Marcos Alonso as a makeweight to sign Inter Milan defender Achraf Hakimi this summer.

Everton to miss out on Denzel Dumfries?

Everton are set to face stiff competiton from Inter Milan for the signature of Denzel Dumfries this summer.

Chelsea have been handed a boost in signing Wolverhampton Wanderers forward Adama Traore this summer.

Chelsea have reportedly made a fresh move for Inter Milan defender Achraf Hakimi.

Arsenal have identified Lille defender Zeki Celik as the potential replacement for Hector Bellerin during the summer transfer window.

Chelsea have been dealt a transfer blow with Inter Milan reluctant to sell Romelu Lukaku at any price.