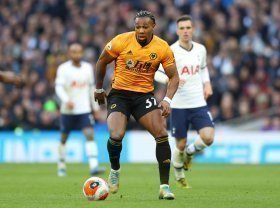 Tottenham will allow Bryan Gil to leave the club for Valencia on loan until the end of the season, whilst Tanguy Ndombele looks set to rejoin former club Lyon. Both midfielders have fallen out of favour since Antonio Conte arrived at White Hart Lane.

Barcelona will sign Pierre-Emerick Aubameyang this week, with the Gabon international forward set to end his Arsenal stay. The player has fallen out of favour at the Emirates.

Tottenham have made an eleventh hour bid for Rodrigo Bentacur. The defensive midfielder, who remains on the radar of Aston Villa, has caught the eye in Serie A with a number of impressive displays for Juventus.

Liverpool to swoop for Adama Traore?

Liverpool could reportedly compete with Tottenham Hotspur to sign Adama Traore this month.

The Daily Express has reported today that Adama Traore is the number one transfer target for Tottenham this January transfer window. Spurs manager Antonio Conte is eager to upgrade his squad, and Wolves winger Traore the primary target.

Liverpool have emerged as potential contenders to sign Adama Traore during the January transfer window.

Liverpool to step up interest in Wolves star?

Liverpool are reportedly preparing to step up their interest in signing Wolverhampton Wanderers attacker Adama Traore.