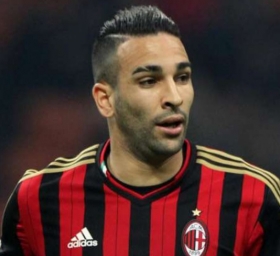 Derby County: Club in the race to sign Adil Rami
is said to be keen on a move to the Premier League before the closure of this month’s transfer window but it’s understood...
28/01 17:10

Crystal Palace are lining up a bid to bring Sevilla defender Adil Rami to the Premier League this summer. The France international has two years left on his contract with the La Liga club.

English champions Leicester City have made a formal enquiry to sign Sevilla centre-back Adil Rami this summer. The Frenchman had a good season with the Europa League champions and this has earned him a place with his national side for Euro 2016.

Sevilla has reached an agreement to sign AC Milan defender Adil Rami, subject to a medical.

Manchester United could get their hands on AC Milan defender Adil Rami for a cut-price deal this summer, according to a French source.

Manchester United could offer striker Javier Hernandez in a deal which would see AC Milan defender Adil Rami move the other way, The Star reports.

AC Milan have secured the services of Adil Rami for the new season. The Italian side agreed a 5 million euro fee with Valencia for the centre back, who will partner Alex at the heart of a new look defence.

Arsenal are reportedly keen on landing the signature of Adil Rami in the upcoming transfer window, according to The Daily Express.

Valencia are reportedly set to make an offer to sign Liverpool defender Tiago Ilori on loan when the transfer window opens up in January.

Valencia defender Adil Rami is reportedly set to join Serie A outfit AC Milan on loan, when the winter transfer window opens up in January.

Serie A side AC Milan have reportedly joined Arsenal in the race to acquire the signature of Valencia defender Adil Rami, talkSPORT reports.

La Liga outfit Valencia have reportedly put up their defender Adil Rami for sale after fining him for his comments against manager Miroslav Djukic.

Premier League outfit Tottenham Hotspur are set to join the race with Fiorentina for the signing of French defender Adil Rami from Valencia.

The Gunners are in search for a new centre-back as their club captain Thomas Vermaelen was deemed unfit for the start of the Premier League season due to a back injury.

Valencia defender Adil Rami has admitted that a move to the Premier League would be of interest to him. Anzhi, the Russian side, have shown some interest in the player already.

Sunderland are reportedly interested in Lille defender Adil Rami. Currently at Lille, Rami is valued at by Lille in the region of £2.5 million.