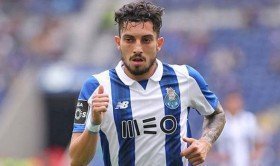 Chelsea morning headlines as twist emerges in Alex Telles transfer race, Kante resumes training
Chelsea matches will be on terrestrial TV for the remainder of the Premier League campaign. As outlined by...
29/05 08:00

Chelsea have reportedly opened negotiations with Leicester City over a possible summer deal for Ben Chilwell.

Chelsea will reportedly step up their interest in signing Leicester City defender Ben Chilwell after missing out on Porto's Alex Telles.

Chelsea to miss out on Primeira Liga defender?

Chelsea are reportedly set to miss out on the services of Alex Telles with Paris Saint-Germain said to be in advanced negotiations to sign the Porto defender.

Chelsea have reportedly been handed a boost in their pursuit of Porto defender Alex Telles.

Barcelona could reportedly go head-to-head with Chelsea in the race to sign Alex Telles from Porto during this summer's transfer window.

Chelsea to miss out on Ben Chilwell?

Chelsea could reportedly look into alternative options to Ben Chilwell with Leicester City reluctant to lower their £80m asking price for the defender.

Chelsea are reportedly in advanced talks with Porto as they seek to negotiate the transfer of Alex Telles ahead of the summer transfer window.

Chelsea will reportedly make an attempt to sign Alex Telles from Porto, suppose they are unable to strike a deal with Leicester City for Ben Chilwell.

Chelsea will reportedly have to come up with a bid of around £34.5m in order to land the services of Alex Telles from Porto this summer.

Chelsea have been handed with a boost in their pursuit of Brazilian defender Alex Telles after he turned down a contract extension at Porto.

Juventus set to hijack Arsenal target in a swap deal

According to Goal.com, Juventus are in talks with PSG over the swap deal of full-backs Mattia de Sceglio and Layvin Kurzawa, with the latter one heading to Turin.

Chelsea will reportedly seek to bring in four high-profile players during the summer, should they manage to delay their transfer ban with the appeal.

Premier League holders Chelsea are reportedly keeping a close watch on Porto left-back Alex Telles ahead of a potential move for his services next month. The Brazilian-born defender has been with the Primeira Liga outfit since 2015, contributing two goals in 60 appearances across all competitions.

Antonio Conte has shifted his attention to Porto full-back Alex Telles after Alex Sandro reportedly snubbed Chelsea in favor of a possible transfer to Paris Saint-Germain.

Galatasaray youngster Alex Telles is being monitored by Chelsea manager Jose Mourinho, but the left back has been told that he must stay at the Turkish club. The Blues had a reported 8 million GBP rejected by Gala.

Chelsea to move for Alex Telles?

Chelsea could consider a move for Galatasaray full-back Alex Telles, The Sun reports.