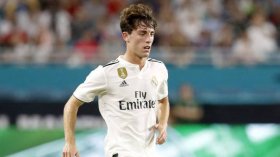 Bayern Munich are reportedly eyeing a move for Ajax right-back Sergino Dest, according to the Dutch outlet De Telegraaf.

Real Madrid outcast on the brink of loan move to Bundesliga

According to Spanish outlet AS, Real Madrid star Alvaro Odriozola is on the brink of joining Bayern Munich on a loan deal.

Real Madrid boss Julen Lopetegui could reportedly make an attempt to sign Marcos Alonso from Chelsea before the transfer deadline this month.

Nacho Monreal on the move?

Arsenal defender Nacho Monreal could reportedly be heading for a summer exit with Real Sociedad leading the race to acquire his services.