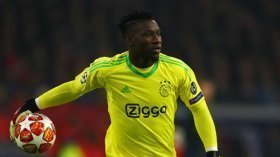 Chelsea goalkeeper Kepa Arrizabalaga wanted by Valencia in loan transfer after being dropped by boss Frank Lampard
deal would also depend on Chelsea bringing in Ajax's Andre Onana before they would entertain allowing Kepa to depart....
24/05 19:02

Chelsea have received a boost in signing Ajax goalkeeper Andre Onana with manager Erik Ten Haag admitting that the player can leave the club at the right price this summer.

Chelsea have confirmed that they have agreed personal terms over a five-year contract with Hakim Ziyech ahead of his move from Ajax during the summer transfer window.

Chelsea could reportedly face competition from Barcelona in the pursuit of goalkeeper Andre Onana from Ajax during the summer transfer window.

Tottenham are reportedly closing in on the signing of Fenerbahce goalkeeper Altay Bayindir.

Chelsea have reportedly emerged as favourites to land the signature of goalkeeper Andre Onana from Ajax during the summer transfer window.

Tottenham Hotspur are targeting Ajax goalkeeper, Andre Onana to replace Hugo Lloris. However, before bringing in Onana, Spurs have to get Lloris out of the club because Onana does not want to be a backup goalkeeper.

Argentine goalkeeper to replace David de Gea for the number one role?

Argentina international Sergio Romero could be handed with the number one duties at Manchester United, should David de Gea part ways with the club this summer.

Manchester United are reported to have failed with an opening bid worth £35m for the signature of Ajax shot-stopper Andre Onana.

Barcelona have reportedly dropped Ajax defender Matthijs de Ligt from their summer transfer shortlist amid interest from the likes of Arsenal, Manchester City and Juventus.