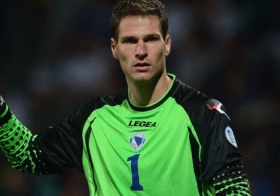 Manchester United considering a move for Asmir Begovic
in the Premier League and ability to step in at any level.” However, they add that any deal will stipulate on the ability for “Everton to
18/08 12:00

AC Milan has completed a deal to bring Danish international defender Simon Kjaer back to Serie A. The 30-year-old, who is actually owned by Atalanta, has spent the majority of the first-half of the season on-loan at Sevilla, but as the Rossoneri prepare for this afternoon’s game in Sardinia against Cagliari, the medical team at Milanello will be putting the Dane through his paces before confirmation that he will remain on-loan in Italy for the remainder of the campaign with a view to making the move permanent in the summer.

Former Manchester City goalkeeper Willy Caballero has undergone a successful medical with Chelsea ahead of his proposed move to west London.

Former Manchester City goalkeeper Willy Caballero is to make a move to Chelsea this summer as a replacement for the departing Asmir Begovic, who has joined Bournemouth permanently this summer.

Chelsea manager Antonio Conte is planning a contract offer for Spanish goalkeeper Willy Caballero who is a free agent after his release from Manchester City.

Chelsea are on the lookout for a new backup goalkeeper after Asmir Begovic completed his move to Bournemouth on Tuesday and they have set their sights set on Paris Saint-Germain stopper Alphonse Areola.

Bournemouth have signed goalkeeper Asmir Begovic from Chelsea for £10 million.