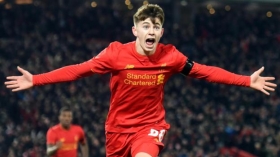 Liverpool have reportedly decided against recalling Harry Wilson from his season-long loan deal at Derby County at the turn of the year.

Jurgen Klopp is expected to rotate his first-team squad when they make the visit to the King Power Stadium to take on Leicester City in the League Cup. The Tuesday night clash offers the German with an opportunity to test his bench strength with Alex Oxlade-Chamberlain set to start his first Reds game.

Liverpool have reportedly stepped up their plans to offer a new long-term contract to midfielder Benjamin Woodburn.

Liverpool set to finally end their pursuit of Naby Keita

Liverpool will not be coming back with a third offer for the Guinea midfielder as Jurgen Klopp is ready to move on and start planning for the new season without Keita.

Gareth Bale is the biggest superstar that the Welsh national team has seen for many years. Guiding the team through their highly successful European Championship campaign, and now on the verge of a La Liga and Champions League double with Real Madrid, he has urged the Spanish giants to sign the next big Welsh star.