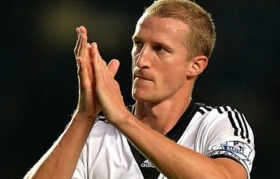 Newly promoted Premier League side Bournemouth are hopeful that a deal can be agreed to sign Norway international defender Brede Hangeland. The Cherries are planning a busy summer on the transfer market and are looking to sign experienced players for the new campaign.

Hangeland snapped up by Crystal Palace

Premier League side Crystal Palace has confirmed the signing of defender Brede Hangeland from rivals Fulham.

Hull City are rumoured to have contacted Norwegian defender Brede Hangeland regarding a free transfer move to the Tigers. The player is currently a free agent having been released by Fulham last season.

Brede Hangeland released by Fulham; finds out via email

Fulham are ready to part company with club captain Brede Hangeland. Leicester City are considering a move for the defender.

Fulham to sell Hangeland in summer

Norwegian defender Brede Hangeland will be sold by Fulham in the summer as the centre back seeks pastures new.Fulham are so far struggling in their efforts to survive in England's top flight and it is understood that the club have agreed to release the defender if the Cottagers are relegated to the Championship.

Fulham have completed the signing of VfB Stuttgart midfielder William Kvist on a season long loan.Kvist, who played with Fulham captain Brede Hangeland at Danish side FC Copenhagen, is widely regarded as one of Europe's best set piece specialists and is expected to be an essential member of Rene Meulensteen's squad for the final half of the league season.

Arsenal, Fulham and Liverpool in race to sign Alexander Milosevic

Swedish defender Alexander Milosevic is a target for several Premier League sides. Arsenal, Fulham and Liverpool are all amongst the teams vying for the 21-year-old's signature. The AIK centre back has been told that he is free to leave in January for a bigger club.

Fulham manager Martin Jol remains confident that his club can secure the long term future of Norway international full back Brede Hangeland. The defender has been locked in contract talks with the Cottagers for over a year.

Fulham manager Martin Jol has admitted he is keen to tie up a new deal for Norway international defender Brede Hangeland, whose contract will expire next summer.

Impressive Fulham centre back Brede Hangeland is reportedly locked in talks with his club regarding a new five year contract at Craven Cottage.

Fulham are offering Brede Hangeland a new contract, according to reports. It is understood the Norway international will be set to earn around £35,000 per week to stay at the Cottagers.

Arsenal are ready to make a move for Brede Hangeland should Kolo Toure quit the Gunners and head to Man City, as expected. The Emirates side will have to pay £12 million to land the Norway international.

Brede Hangeland is reported to be in discussions with his club Fulham concerning a move to London rivals Tottenham Hotspur in July. Hangeland excelled at the heart of an impressive Fulham side last year.

Phillipe Senderos has emerged as a target for Fulham in the wake of the news that defender Brede Hangeland could well be set for a move elsewhere. Senderos could leave Arsenal for a figure in the region of £3.5 million.

Brede Hangeland, the highly rated defender, is in the radar of many clubs, but, it seems Arsenal is more likely to secure the signature of the six feet five inch centre-back.

The commanding centre-back, Brede Hangeland, had been offered a new deal to stay at the Craven Cottage. The Norwegian is in the radar of many top English and European clubs, it is not known if he wants to continue with Fulham or play for a better club.

Premiership Team of the Week

The Premiership 'Team of the Week' for 1st December 2008 had a few obvious choices. The stylish brace from Robin van Persie made him an automatic selection, meanwhile the impressive Bolton away victory from Sunderland saw a couple of their men make an appearance this week.

Fulham were unfortunate to lose to Everton at Goodison Park in the early afternoon kick off today, and twice Fulham were denied by the woodwork, once through Zoltan Gera and again from Bobby Zamora. It took until the 86th minute for the deadlock to be broken, through former Cottagers striker Louis Saha.