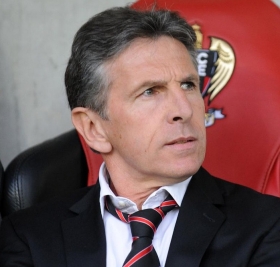 'Father Christmas has already given me a gift' - Pochettino focused on new challenge at PSG as he dodges Messi questions
boss Claude Puel a familiar face to Pochettino. Former Southampton and Leicester City manager Puel has faced Pochettino six times, with the
05/01 15:55

Liverpool to loan out Harry Wilson next season?

Liverpool are likely to loan out Harry Wilson to a Premier League club next term in order to enhance his prospects of regular gametime at the highest level.

Leicester City manager Claude Puel has indicated that the club have no plans of parting ways with Harry Maguire in the near future amid the speculated interest from Manchester United.

Everton could reportedly make an attempt to sign Jamie Vardy from Leicester City when the transfer window reopens in January.

Japan and Leicester City striker Shinji Okazaki could be set for a move to Turkey, with Galatasaray ready to pay £4.5 million to sign the Premier League winning striker. Okazaki is ready to leave the Foxes in search of regular first-team football having lost his place in recent months.

Nathaniel Clyne is a target for Leicester City in the January transfer window, having fallen out of favour with Liverpool's coaching team during the past year. It is understood the right-back is ready to move for a fee of £5.5 million.

Leicester City defender Jonny Evans has spoken of his displeasure at not playing regularly for his side so far this season.

England and Leicester City striker Jamie Vardy has agreed a fresh contract with the Foxes, thus ruling out talk of a move away from the Premier League side. The forward is expected to play an important part of the Foxes' first-team plans this season and had been linked with a move to several other Premier League rivals.

Leicester City defender Harry Maguire is reportedly hopeful of sealing a move to Manchester United before the transfer window closes on Thursday.

Leicester City are in the race to sign Paco Alcacer from Barcelona. The Spain international striker, 24 years of age, has been on the radar of the Foxes all summer and it is understood that Barcelona will accept a fee of around £35 million for Alcacer.

Claude Puel: We can keep Maguire

Leicester City manager Claude Puel has said that it is important for defender Harry Maguire to stay at the club.

Leicester City are reportedly considering the dismissal of manager Claude Puel with Celtic's Brendan Rodgers identified as a probable replacement.

Evans speaks on his move to Leicester City

Leicester City's new signing Jonny Evans has said that he couldn't turn down the opportunity to play for an ambitious club like The Foxes when it came up.

Leicester City centre-back Harry Maguire is Man Utd's top summer transfer target, according to multiple reports. With Phil Jones set to be sold by Jose Mourinho this summer, United are in the market to sign new defensive players.

Arsenal have been linked with a shock move for holding midfielder Wilfried Ndidi. The Leicester City man arrived at his current club in January 2017 and has started to show the form that made him one of Europe's highly rated midfielders.

Hatem Ben Arfa has struggled to make an impact at Ligue 1 giants Paris Saint-Germain and he is expected to leave the club as a free agent at the end of the season, with Premier League club Leicester City reported to be interested in giving him another opportunity in England.