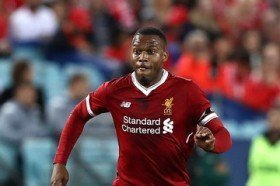 Raheem Sterling can repeat Daniel Sturridge feat if he completes £60m Chelsea transfer
Chelsea, Manchester City and Liverpool in the Premier League era. Can you guess who they are? Nicolas Anelka, who signed for Liverpool on
21/06 06:00

Newcastle United have no plans of signing former Liverpool striker Daniel Sturridge on a free transfer.

Newcastle United have reportedly been handed the opportunity to sign Daniel Sturridge on a free transfer.

Former Liverpool striker Daniel Sturridge has opened talks with Aston Villa regarding a free transfer move this summer. The England international has numerous offers, but it appears as if Villa are winning the race to sign the player.

Liverpool are amongst the teams in the race to sign Lille's talented striker Nicolas Pepe this summer, with the player's agent confirming that the Anfield side have been in negotiations with the Ligue 1 side's striker. The Champions League winning side are looking to sign a new striker this summer as a top priority.

Liverpool and Arsenal have reportedly joined Manchester United in the race to sign French forward Moussa Dembele from Lyon.

Divock Origi is reportedly on the cusp of penning a new long-term contract with the club after his sublime showing during the backend of the campaign.

Liverpool have reportedly joined the likes of Arsenal and Tottenham Hotspur in the race to sign Ryan Fraser from Bournemouth this summer.

Liverpool have reportedly made contact with Max Kruse, who is available on a free transfer when his contract expires with Werder Bremen next month.